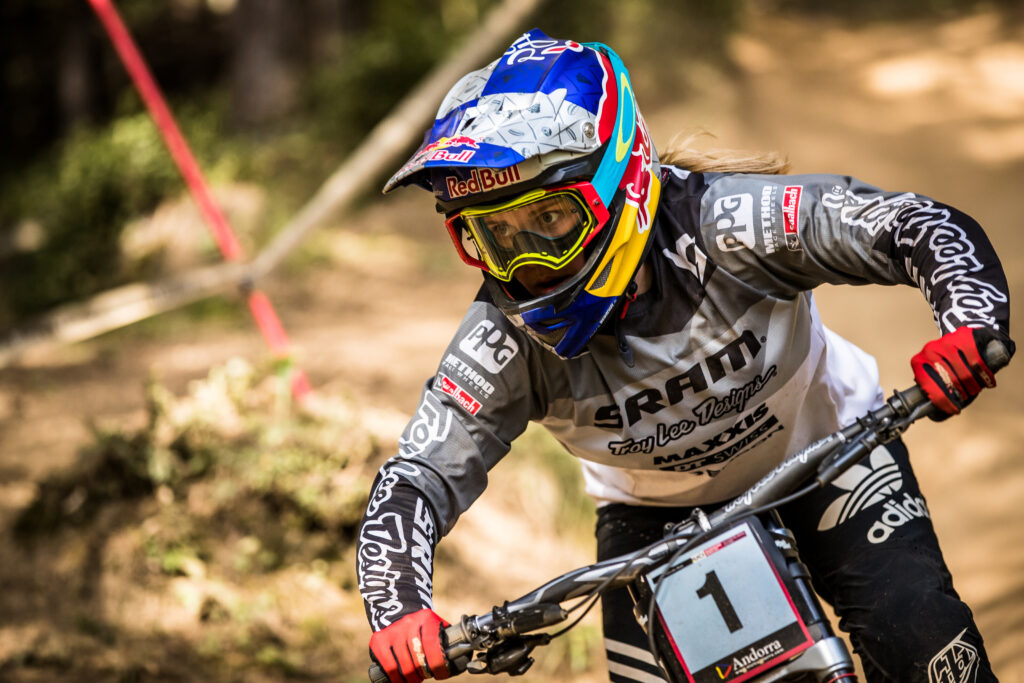 Do you think this delayed start is an advantage for you?

For sure. I always have the problem that I don’t have enough time to prepare well like I only have three weeks of holidays between school to get ready for the first race, which is not a lot of bike time to be honest. Now I can ride every day when I want to and just get confident and fast on the bike.

There is a lot of expectation around you after your last two seasons in the junior category. How do you cope with the pressure of being the next big thing in senior racing?

To be honest, I do not know why so many people think I will do that well. I still have to learn a lot. I guess I was quite lucky the last two years and it worked out pretty well. Now racing against elite racers, you can’t make any mistakes and you have to give your very best.

We read an interview that your school mates are not that interested if you do something great on the bike. Is that true?

Biking is not that big in Austria still and not that many people know that I ride World Cup or that it is that serious to be honest. Slowly they kind of recognise it because it is way more in the media and more people talk about me at home. Now they know what I do.

Does it help you stay more grounded and calm?

For sure it helped me that not everyone knew that I just won a World Cup because it would have been a little bit weird but at the same time in school it would be tough because you come home Sunday night from a race or even a long overseas flight and the next day you are in school nobody knows that you have been at the end of the world or that you are tired maybe or hurt because you crashed all the time so both sides were good and bad.

If you compare school and World Cup racing, what is more nerve-wracking?

For me, definitely, World Cup racing because I guess I put way more hard work to give my very best and in school I never really learned a lot because I was a bit lazy. The results were still good, but I didn’t really care if it was good or bad. 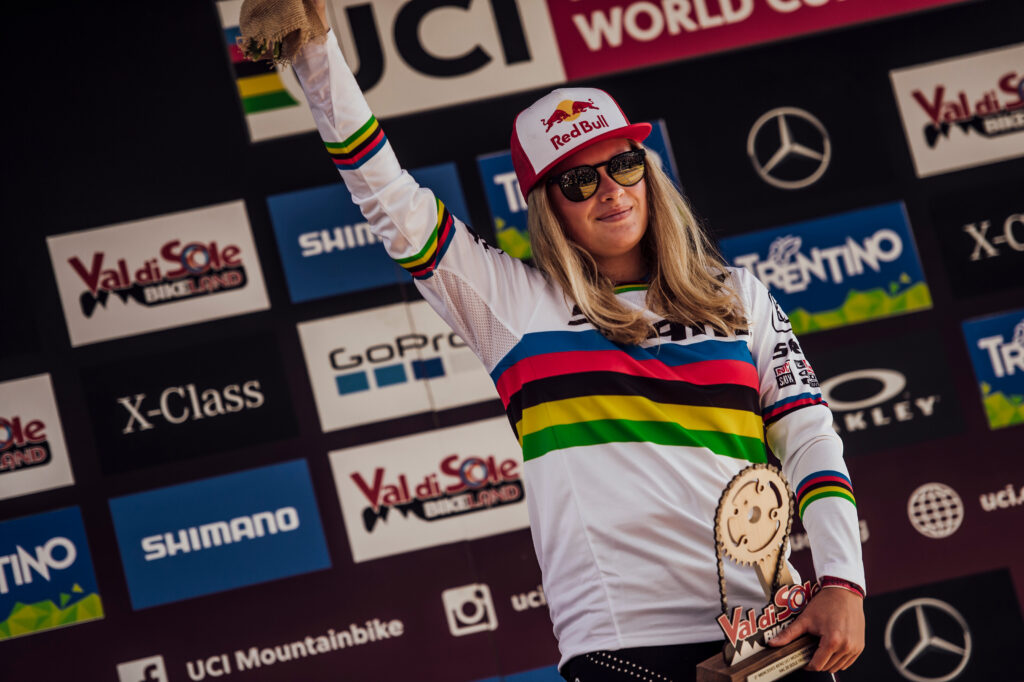 Growing up, who was your inspiration?

At the beginning, it was my godmother Angie Hohenwarter because she is also a bike pro and she taught me not just on the bike but all the business like getting sponsors – how to talk to them and how to present yourself. That helped me a lot. When I discovered racing, for sure, Rachel Atherton. She is awesome.

She sent you a lengthy message. What did she say?

I got an email from her. They wanted to have me in the team. Two months before I got a contract from YT, which was for six years, so it was quite difficult to jump to another team at that time. I was super young. It was weird that so many people were interested in me because I didn’t know why or what they would expect from me doing something crazy. I was pretty lucky to get a deal with YT, which is still going on and I am pretty happy about those long relationships.

There was my very first bike race when I was three years old. I didn’t know how races work and I didn’t know that cameras could take photos when you are moving so every time there was a photographer I stopped and I was posing then I kept on pedalling and then I stopped again. I was last, but every child got a medal, so I was not sad about it.

Are there any new changes on your bike?

We tested way more this year. As I am getting older, I am more interested in it too. I want to get my bike as fast as possible. Also, as I am trying to be as fast and as fit as possible. It is definitely a part of it and even if it is hard to understand how it goes – I guess for everyone – for sure I am testing way more and trying stuff even if it is bad you know it was fast. 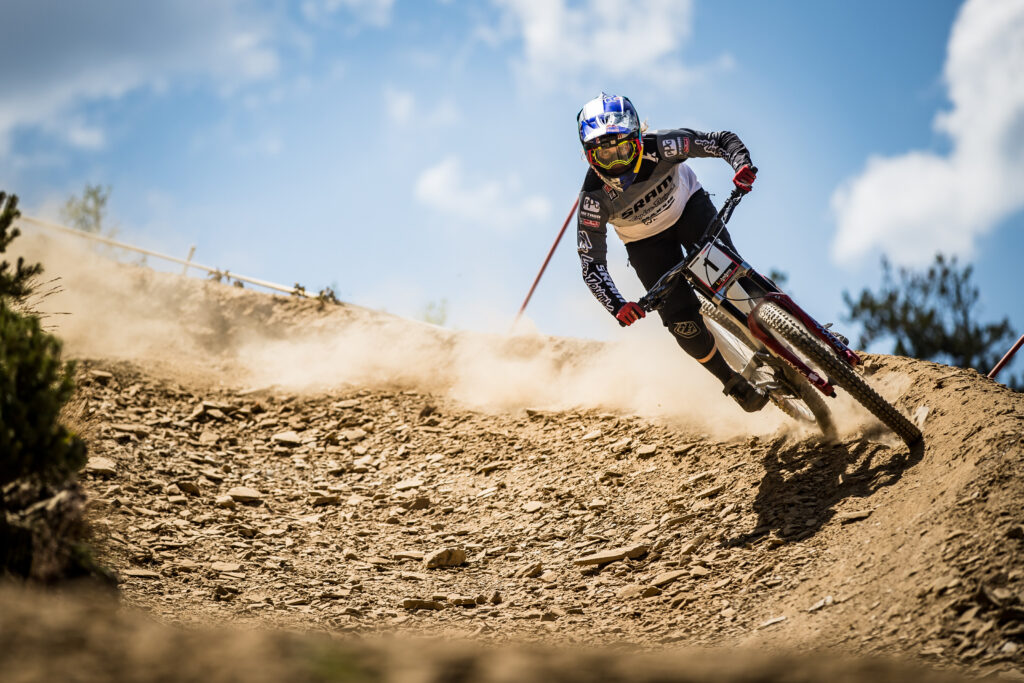 Can you describe your feeling when the clock starts ticking again on a race run?

To be honest, I don’t like the feeling I have before the start. I feel so sick, it feels like I am going to vomit somewhere. It is just amazing when you are in the start gate, like those 30 seconds before you drop in it is weird how your brain is switching into a different mode and you don’t think about anything. That is a nice feeling.

You grew up just around the corner from Leogang, so what are your goals going into your first elite World Championships?

To be honest, I like the track even though a lot of people complain about it but I think you shouldn’t complain about tracks because they will never do well on it and you have to ride whatever you get to because I guess you are pretty lucky if you get the chance to live just riding down bike tracks. I like it.